“Today I learnt a lot about the way Mr Mandela grew up: (his childhood) is just like mine and yours. I admire him for the fact that he was prepared to die for freedom. When I grow up I want to be just like him.” – Simphiwe Maluleke (12), Boepakitso Primary School. 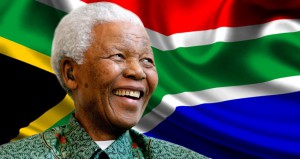 Nelson Rolihlahla Mandela, or  ‘Madiba’  as he was known, is the most iconic of all  South African heroes and role models. We often hear the name, but it might be a good thing to learn more about him and try to understand what he meant to South Africa. It has been two years since Madiba died, and people and children all over the world are remembering his story. Let’s see where he started his life in the Eastern Cape.

Nelson Mandela was born on July 18, 1918, into a royal family of the Thembu tribe in the village of Mvezo, where his father served as Chief. It’s funny to think that Nelson Mandela started his life running around barefoot, looking after cattle, and that he then became the President of our country, and one of the most famous people in the world. But this helps us to realise that everybody can achieve their dreams, no matter how small their beginnings.

Nelson Mandela then grew up, and went to study to be a lawyer in Johannesburg. While he was there, living in the big city, he started to see how bad life was for black people in South Africa. At that time, the country was living under ‘Apartheid’,  which meant that all people were not treated the same, and black people could not vote or own property. Madiba saw that this was unfair, and decided to do something to change this. He believed so strongly that things should change, that we was willing to give up his life for his dream. He said:

“I have cherished the ideal of a democratic and free society in which all persons live together in harmony and with equal opportunities. It is an ideal which I hope to live for and to achieve. But if needs be, it is an ideal for which I am prepared to die.”

Because Nelson Mandela fought for the rights of black people, and fought against the white government of the time, he was thrown into prison. He was only released after 27 years,  but  during all his time in prison  he did not give up hope. Four years after he was released, in 1994, Nelson Mandela became the first black president of a free and democratic South Africa. Nelson Mandela had achieved his dream, and his new government wrote a constitution that promises that everybody in the country has the same rights as everybody else. While he was president of the country, he was much loved by all the people, both black and white. He became a symbol of a new, democratic South Africa. He died two year ago at the age of 95, and the whole world mourned and remembered him.

Nelson Mandela worked hard for what he believed in, and was prepared to sacrifice for his beliefs. He helps us to remember that everybody can make a difference in the world, no matter how small or how big.

Parents, if you want your children to learn more about Nelson Mandela, we can recommend The Children’s Madiba, published by Penguin.